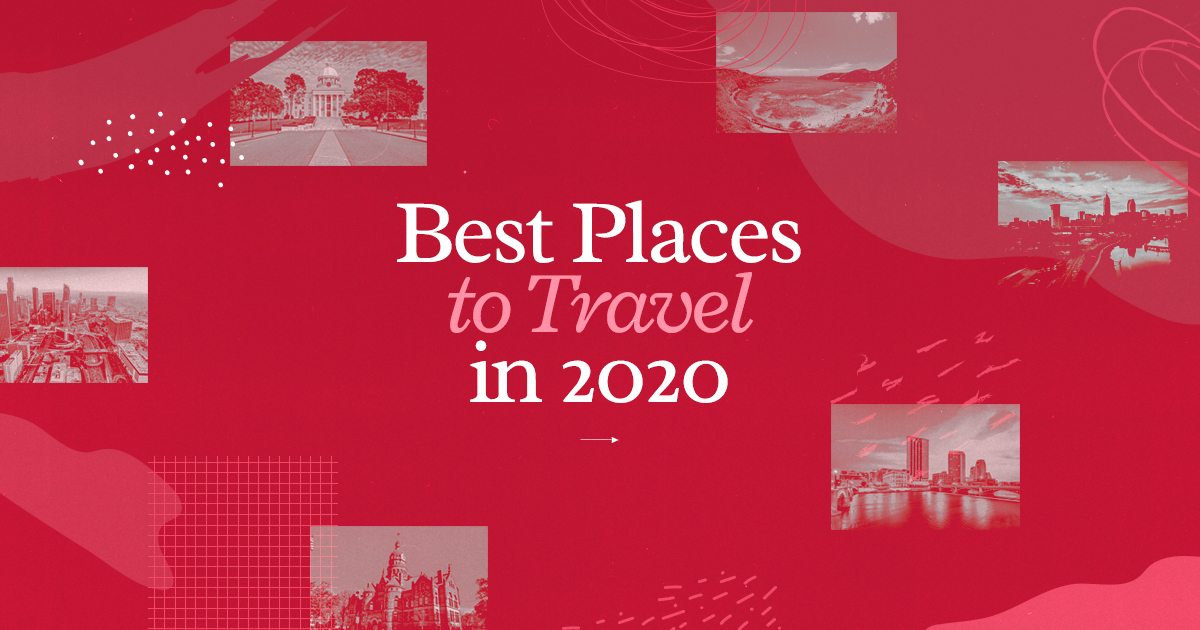 It’s the start of a new decade, and what better way to celebrate than with a vacation? You’ve heard the phrase “New year, New you,” but when you travel to one of the following destinations, you’ll find even more new things. From new venues to new restaurants, these cities are great for seniors looking to start 2020 off right.

If you’re an older traveler looking for the best places to visit in 2020, we’ve got you covered. Check out our list of 20 destinations and discover what’s new on the scene. Whether you want to attend an attraction’s grand opening or check out never-before-seen museum exhibits, now’s your chance! These are the perfect places for senior travelers to visit this year. 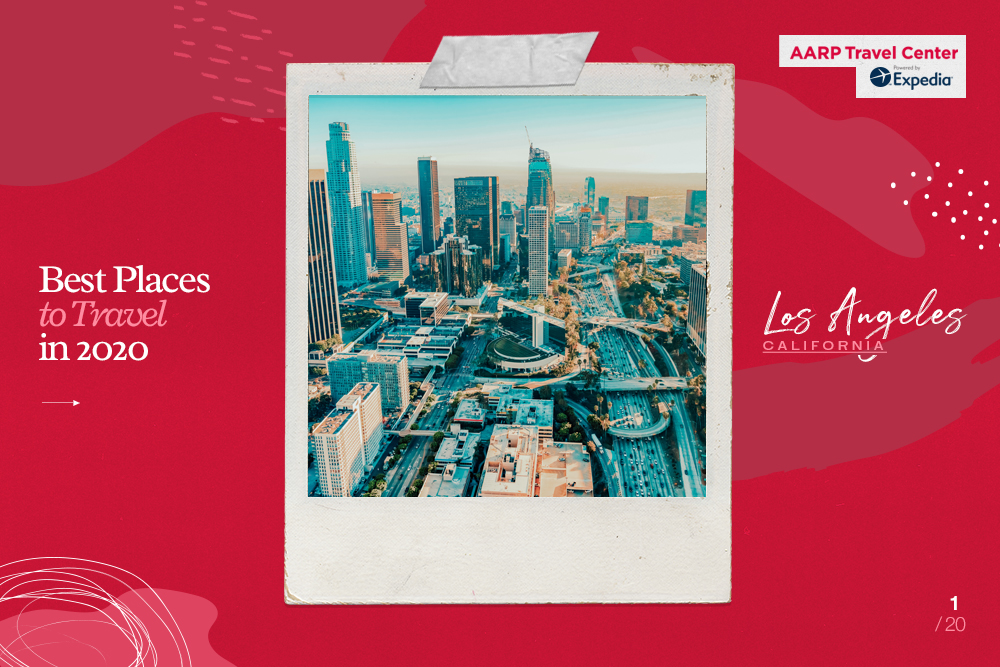 Sports nuts and movie fanatics can unite in LA! In 2020, the city is opening the Academy Museum of Motion Pictures, an exciting new attraction showcases the art of filmmaking. LA is also opening a brand-new stadium, SoFi Stadium, where you can cheer on the Rams and Chargers. And if it’s been a while since your last visit, you’ll see tons of new restaurants opening around town. Look for spots such as Yakido Yakitori and Sibling Rival, among many others. 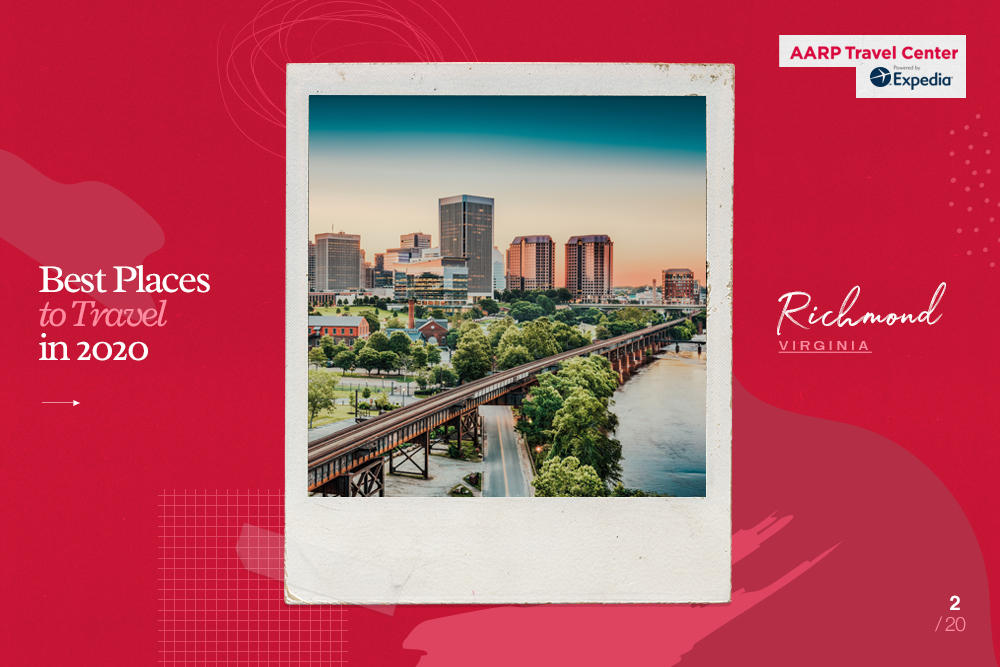 The year 2020 marks the 100th anniversary of the ratification of the Nineteenth Amendment. To celebrate, Richmond is hosting a range of female-focused exhibits, so visit this year and spend your time hopping from one museum to the next. Check out the We Demand: Woman Suffrage in Virginia at Library of Virginia Lobby & Exhibition Gallery. Also view the outstanding exhibit on Virginia and Women’s Suffrage at the Virginia Museum of History & Culture.

Pick from the Richmond hotels. 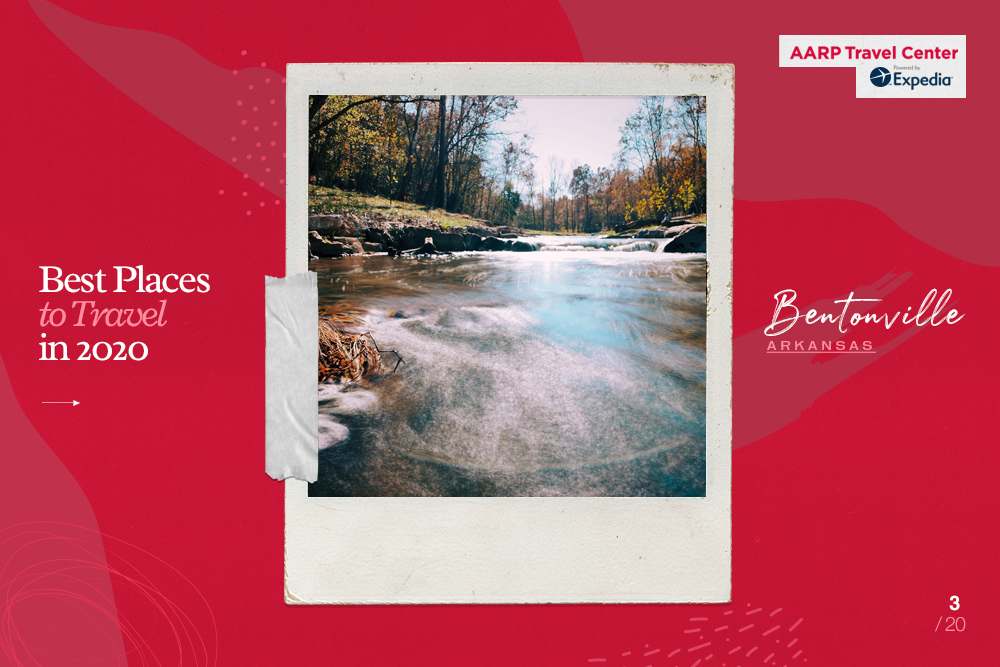 The year 2020 is when the much-anticipated Momentary Museum will open its doors to the public, and you’ll want to be there to experience it for yourself. Focused on contemporary art, the museum will host exhibits, performances, festivals, and more. During your stay, check out new eateries in town too. Ozark Mountain Bagel Company and Street Ninja are the latest newcomers.

Don’t miss the selection of hotels in Bentonville. 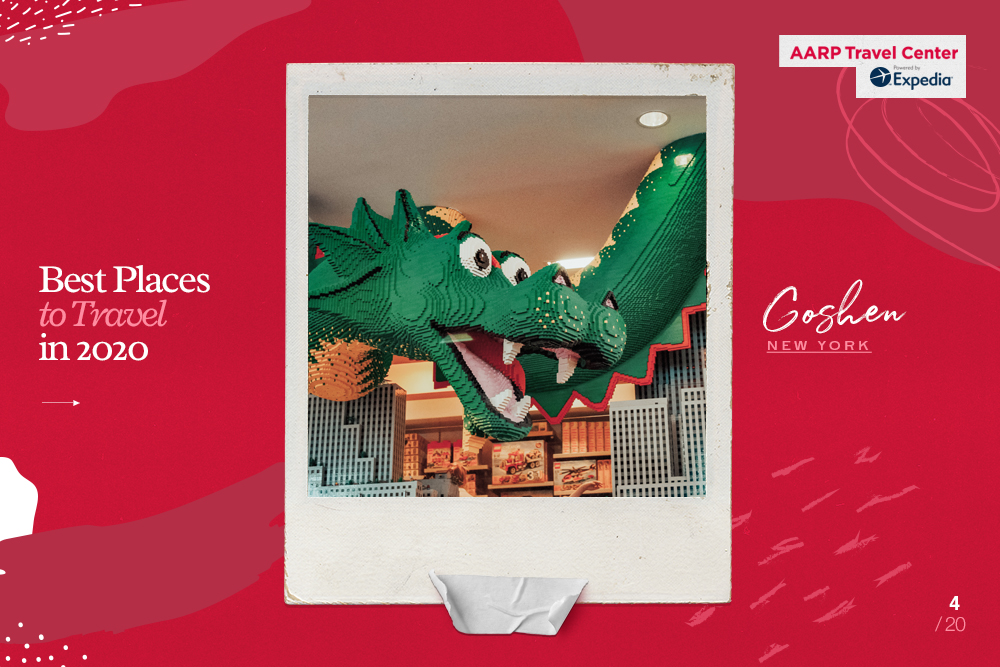 If 2020 is the year you’re looking to travel more with your family, then round up your crew and head to Goshen. In July 2020, the city is celebrating the grand opening of the LEGOLAND Resort. Just an hour outside of NYC, Goshen offers a great escape for the whole family. You’ll find theme park rides and mini-worlds made of LEGO bricks. Your grandchildren will want to spend every vacation with you from here on out!

Choose one of the Goshen, NY hotels. 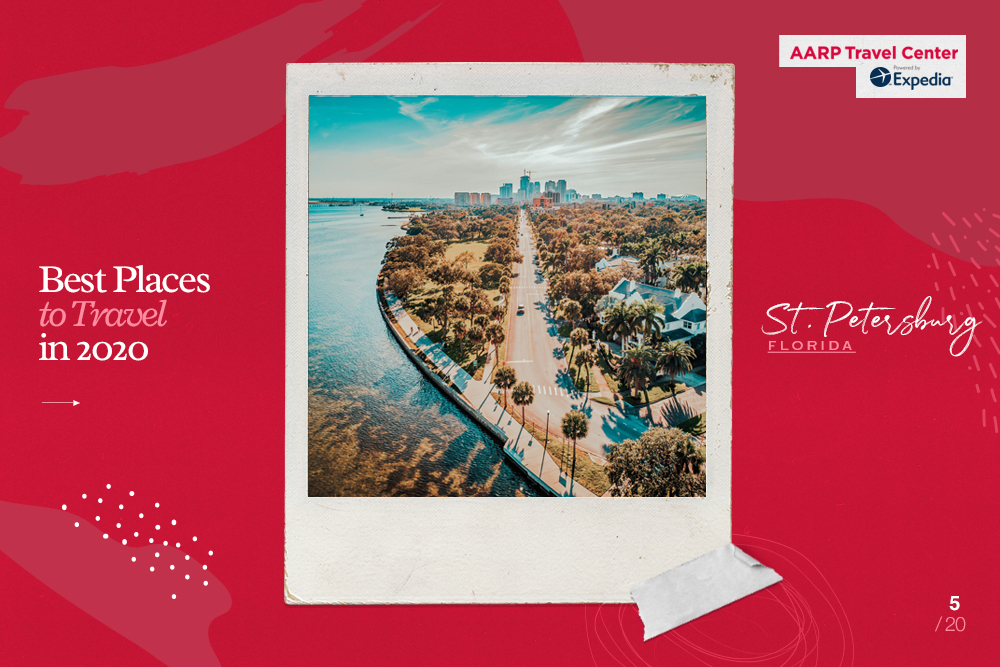 There’s a lot of reasons to vacation to St. Petersburg this year. Of course, you’ll want to see the picturesque beaches and the famous Sunken Gardens, but there’s even more. The city recently opened the Museum of American Arts and Crafts Movement. Be one of the first to view the fascinating art exhibits. The museum showcases all kinds of decorative arts, such as furniture, photography, and pottery from the 19th and 20th centuries. 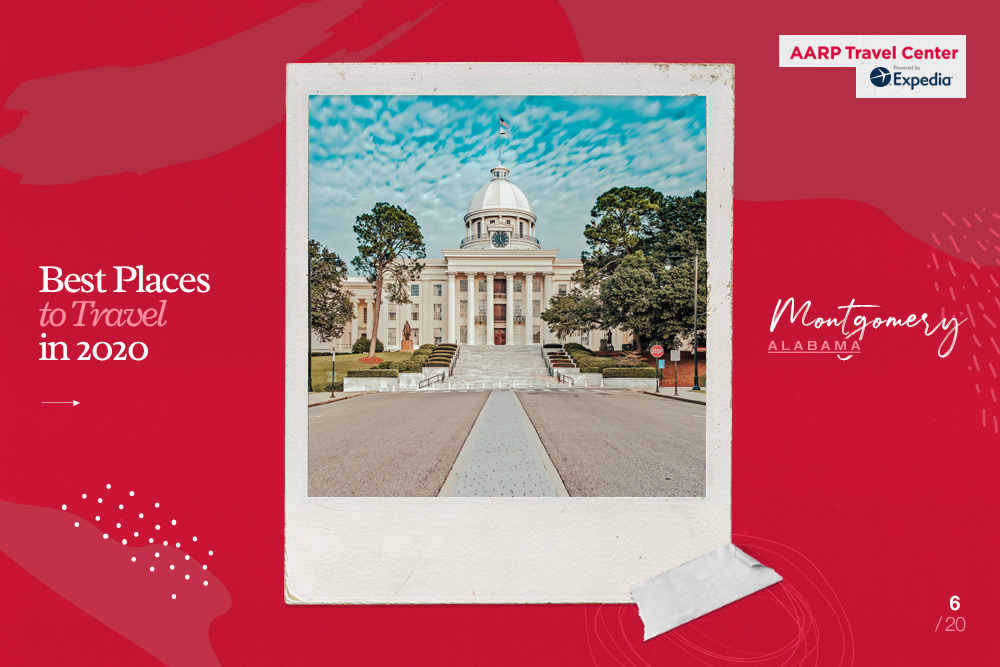 There’s a new lady in town. She may be bronze, but she sure leaves a lasting impression. In December 2019, the city of Montgomery unveiled a statue of Rosa Parks, marking the 64th anniversary of her arrest. In 2020, venture to this to see the brand-new statue that honors Park’s brave actions. While you’re here, visit the powerful National Memorial for Peace and Justice. And don’t miss the Freedom Rides Museum, among many other local Civil Rights Movement sites.

While you’re here, stay at one of the Montgomery hotels. 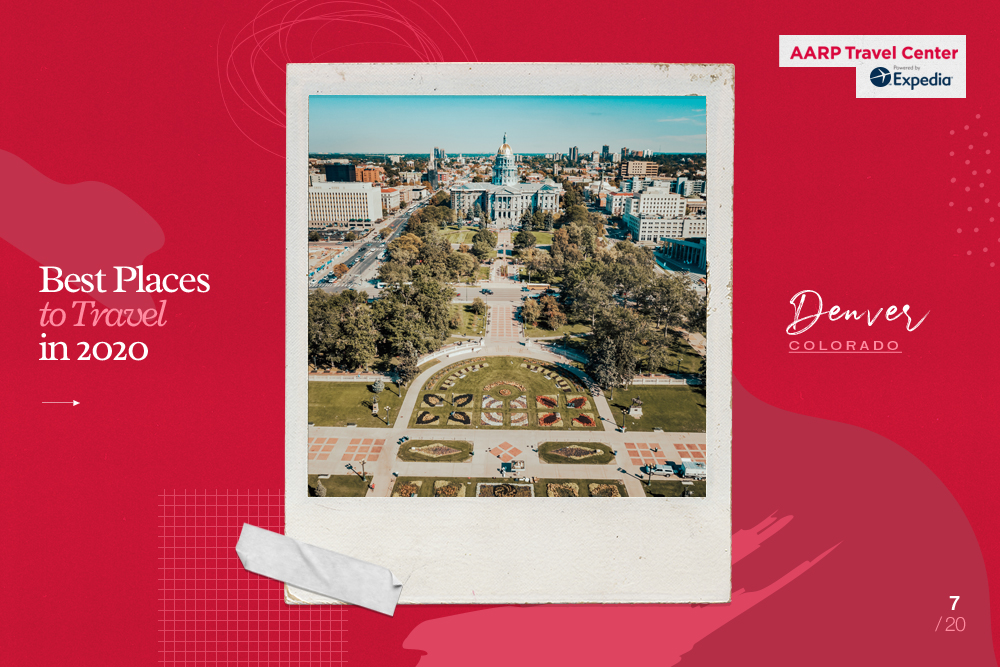 If you’re looking for one of the best places to visit in 2020, don’t overlook Denver. After receiving a makeover, the Denver Art Museum will reopen its North building in July. Visiting earlier in the year? Experience one of the most comprehensive collections of Monet’s works of art. Also, view the Normal Rockwell exhibit on display from May through August. After exploring the masterpieces, bring your appetite to one of the many new eateries, from Tessa Delicatessen to Mister Oso.

Rest easy at one of the many Denver hotels. 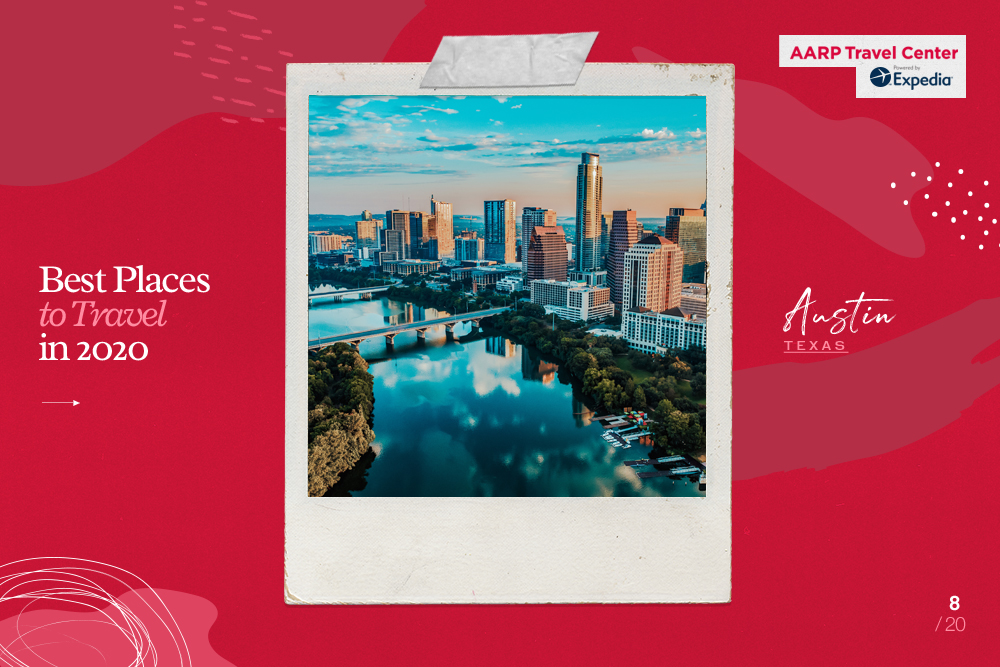 Austin is another city honoring the 100th anniversary of women’s suffrage. Head to the Bullock Texas State History Museum for the powerful Sister Suffragists Exhibit. Afterward, it’s time to chow down. This city is known as a foodie mecca for good reason, and 2020 is welcoming a ton of new restaurants on the scene. Look out for spots like Wanderlust Craft BBQ & Coffee and recently opened Julie Myrtille Bakery and Hestia. 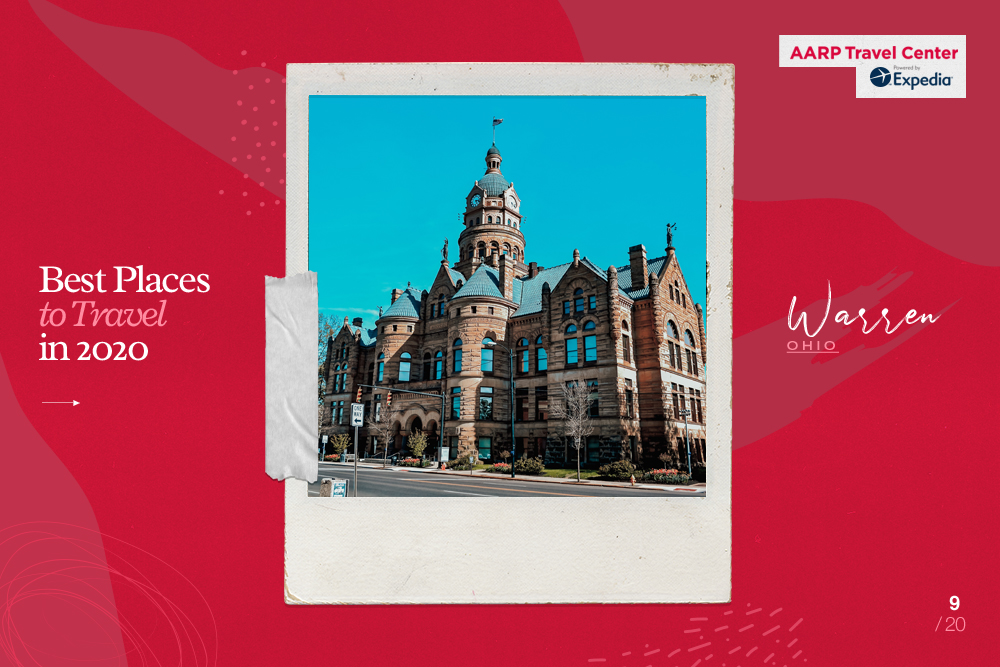 Warren is another fabulous destination to add to your 2020 list. This year, it’s hosting the grand opening of the historic Robins Theatre. The theater closed its doors in 1974 but has recently been restored. The band Big Bad Voodoo Daddy will kick off the grand opening in January, followed by other must-see performances such as ABBA Mania and America. While you’re in town, check out the vintage cars at the National Packard Museum. The Harriet Taylor Upton House is a must-see, too.

Put your feet up at one of the hotels in Warren, OH. 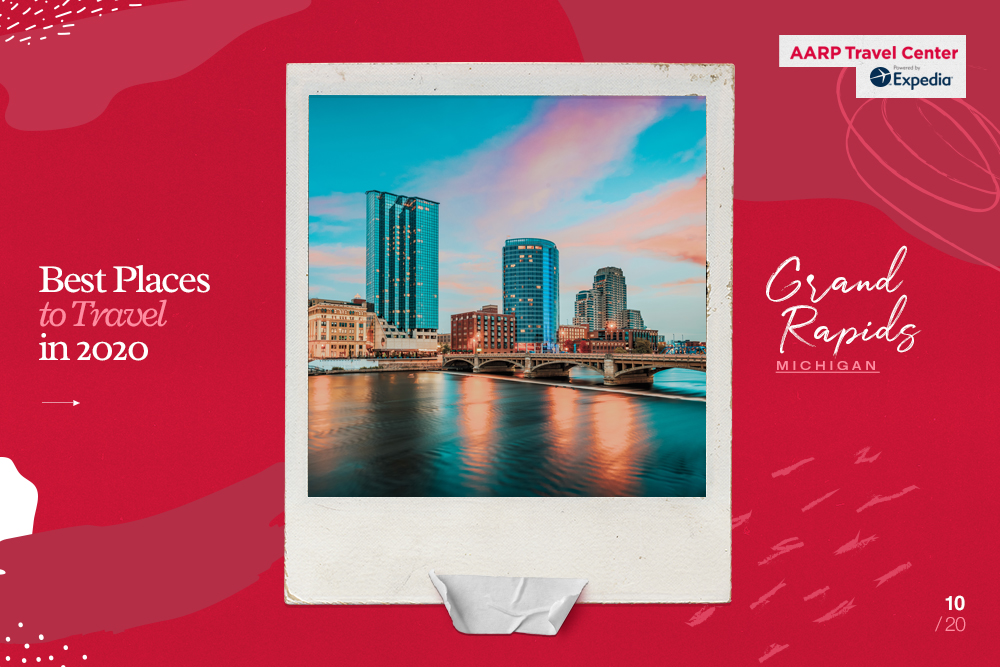 A lot is going on in Grand Rapids in 2020. Want to see Elton John in concert one last time? The music legend will make a stop at Van Andel Arena, as part of his farewell tour. Prefer to spend the day at a museum? Venture to the Grand Rapids Public Museum to see the fascinating Bodies Revealed exhibit on display. If you plan to visit later in the year, keep an eye out for the German-inspired beer hall, Kusterer Brauhaus.

Pick from the selection of Grand Rapids hotels. 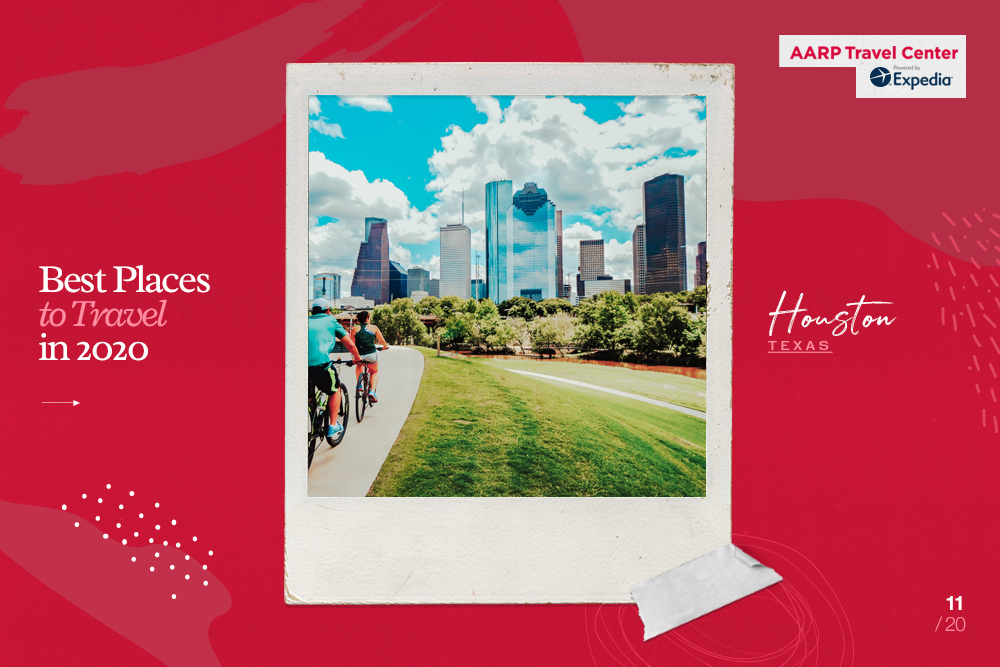 Looking to work on your backswing in 2020? Make your way to Houston, where you can play a round on the recently renovated Memorial Park Golf Course. The revamped course includes a two-tiered, 84-bay driving range. The golf course is also hosting the PGA Tour during fall 2020. While you’re here, visit the Museum of Fine Arts, Houston. The Radical: Italian Design 1965–1985 is on display through April. Considered a must-see exhibit in 2020, it showcases Italian postwar disruptive design.

Pick from the Houston hotels and stay awhile. 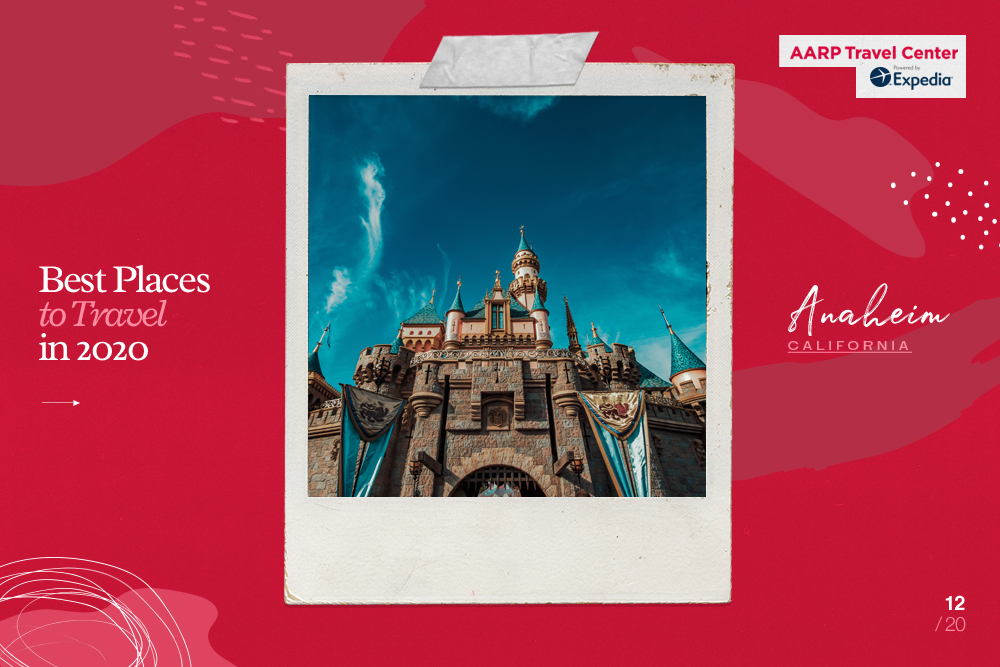 Of course, Anaheim is a prime spot for taking the grandkids. But this year, Disneyland will premiere some amazing new attractions. The famous theme park is launching Star Wars: Rise of the Resistance, the Magic Happens Parade, and Avengers Campus. If your grandchildren still need to blow off some energy after the House of Mouse, make a pit stop. Next, swing by Knott’s Berry Farm in nearby Buena Vista. The park is celebrating its 100th anniversary with a calendar full of special events.

Bring the grandkids along and stay at one of the Anaheim hotels.

Did you know 2020 marks the 50th anniversary of Earth Day? Providence plans to celebrate! It’s also celebrating the 50th birthday of Save the Bay, a local organization that protects the Narragansett Bay. In April, Earth Day, will kick off the birthday celebrations with a beach clean-up and family-friendly event. Later, on September 12, the organization is hosting a 1970s-themed birthday party. It will feature a live auction, performances, and more. Don’t miss the chance to join in on the fun in 2020. 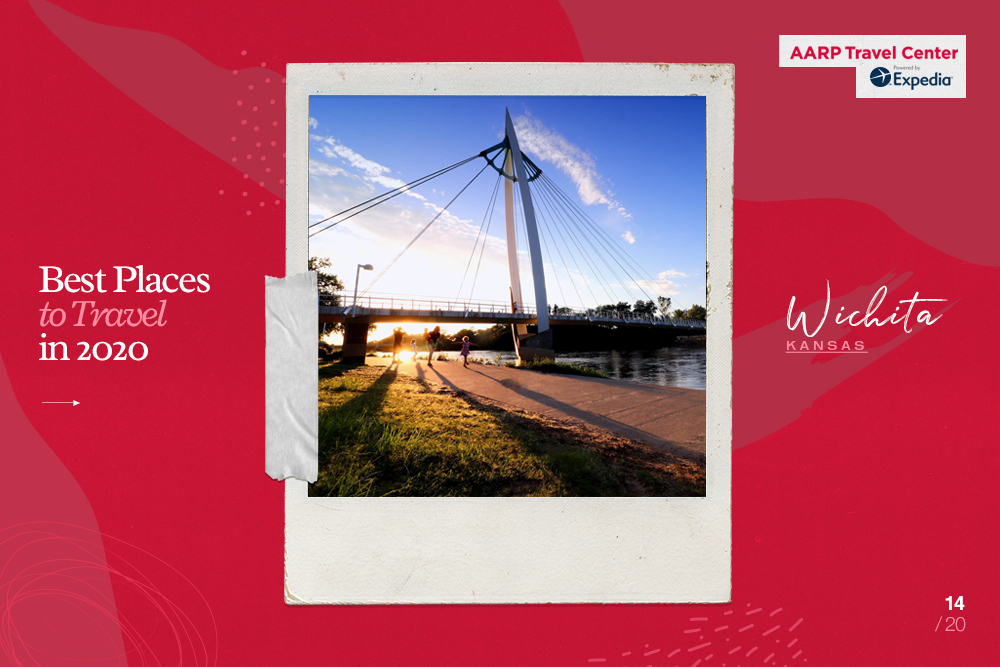 Come indulge in America’s favorite pastime in Wichita in 2020. After a 12-year hiatus, a Minor League Baseball team is coming back to town. Previously known as Baby Cakes, the Wichita Wind Surge is taking the city by storm. They’ll play their first game at a brand-new stadium in April. Grab your peanuts and look out for fly balls at this must-visit 2020 destination.

Check out the variety of Wichita hotels.

The year 2020 marks the 75th anniversary of the end of WWII. To honor the occasion, Peachtree is hosting the 17th annual WWII Heritage Days on May 2-3. The event is the largest WWII-themed event in the state. The celebration will honor veterans all weekend long. Get tickets to the “Keep ’em Flying,” 1940s-theme hangar dance at the Dixie Wing Warbird Museum. Fun fact: it’s the world’s largest WWII flying museum!

Oahu is also taking time to commemorate the 75th anniversary of the end of WWII. The USS Missouri Memorial Association and the Pearl Harbor Aviation Museum are hosting events in tribute. They’ll take place from August 20-September 3. During your visit in 2020, explore the Battleship Missouri Memorial in Pearl Harbor. Tour the Mighty Mo and honor those who served and sacrificed. If you’d like to visit more war memorials throughout the year, check out our guide to some of the best in the nation.

Reserve one of the Honolulu hotels.

When you’re wondering where to visit in the U.S. this year, look no further than Milwaukee. This fall, the city is opening the Warner Grand Theatre, the new home of the Milwaukee Symphony Orchestra. Originally built in 1930, it was once a celebrated vaudeville venue. Get tickets to the symphony now and prepare for the magic to unfold on the brand-new stage. 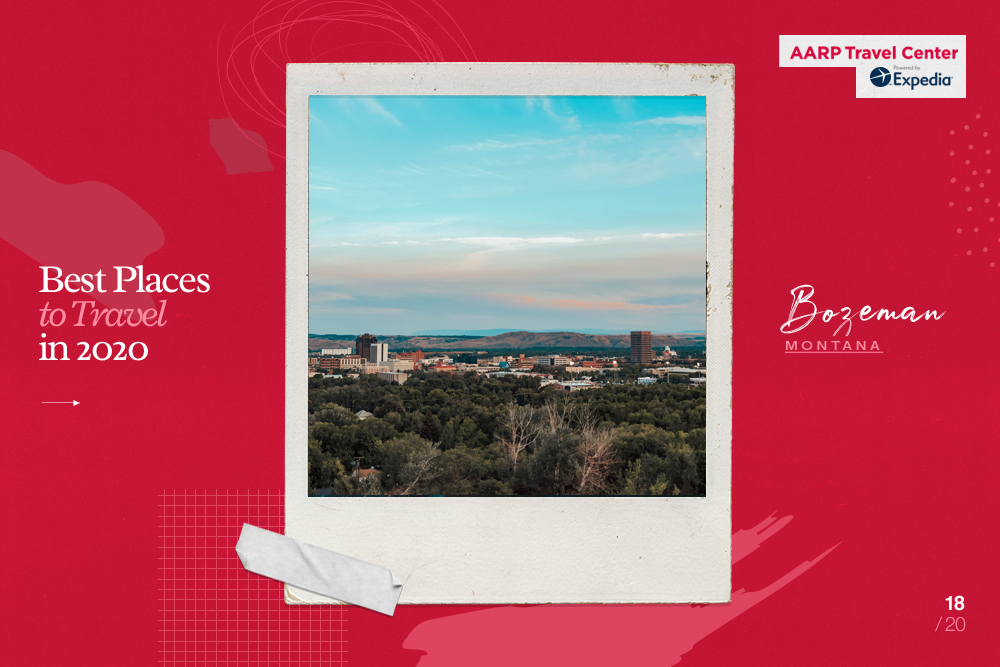 There are countless reasons to visit Bozeman in 2020, but its new concert venue certainly tops the list. The ELM, which the city is calling a world-class venue, will open in winter 2020. Keep an eye on the calendar to be the first to attend one of its events. In the meanwhile, make dinner reservations at Rib and Chop House. The steakhouse is new on the scene and opened its doors in late 2019.

Make reservations at one of the Bozeman hotels.

East Rutherford locals have long been awaiting the full opening of the American Dream mall and 2020 is the year. Though it features more than 450 shops, this isn’t your ordinary mall. The massive facility will include a theme park, indoor ski center, ice rink, and even a water park! It’s one of the largest malls in North America, and it’s time you see it for yourself in 2020.

In 2020, book a trip to Kannapolis and you won’t be disappointed. While you’re in town, get to know the local sports team and cheer on the Kannapolis Intimidators. In 2020, the city is opening its brand-new baseball stadium, the Kannapolis Sports and Entertainment Venue. Snag tickets to a home game and watch the local Minor League baseball team step up to the plate.

The start off a new decade is a great time to embark on adventures. Take a female solo trip. Or go on a trip with the grandkids! This is the year to make traveling a priority. 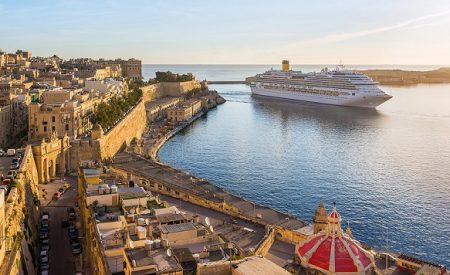 Top Reasons Why a Cruise is Right for AARP Members 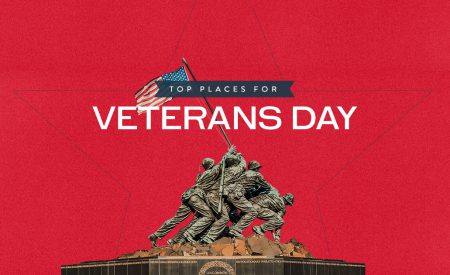