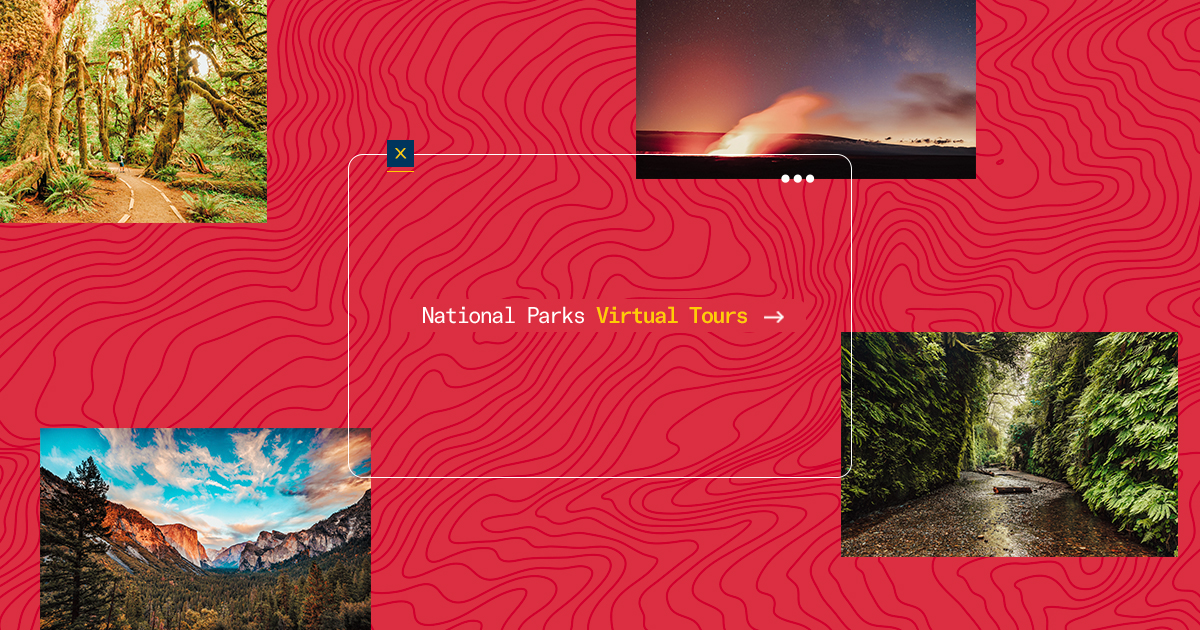 Visiting national parks may be on hiatus but traveling to these destinations has never been easier. If you’ve haven’t seen Yellowstone’s Old Faithful geyser in all its glory or the majestic ombre shades of the Grand Canyon, now is the time. See the country’s most incredible natural wonders without leaving the couch on these virtual tours of America’s most popular national parks. 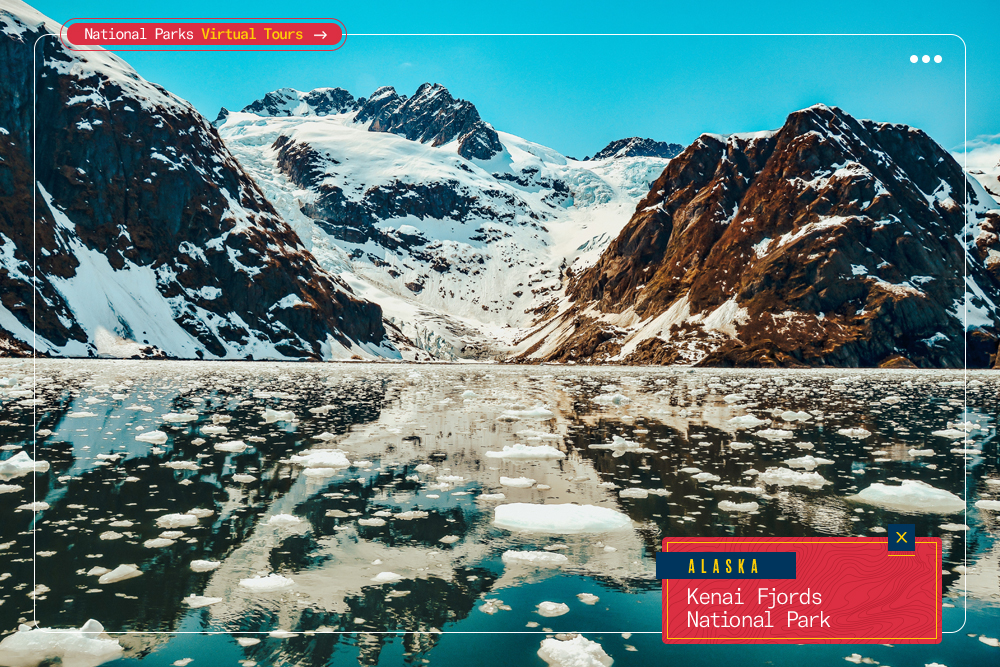 This incredible park is located on the Kenai Peninsula in south-central Alaska and gets its name from the many fjords created by glaciers gliding down the surrounding mountains from the ice field, which is the source of at least 38 glaciers. Kenai Fjords National Park also contains Harding Icefield, one of the largest ice fields in the country. 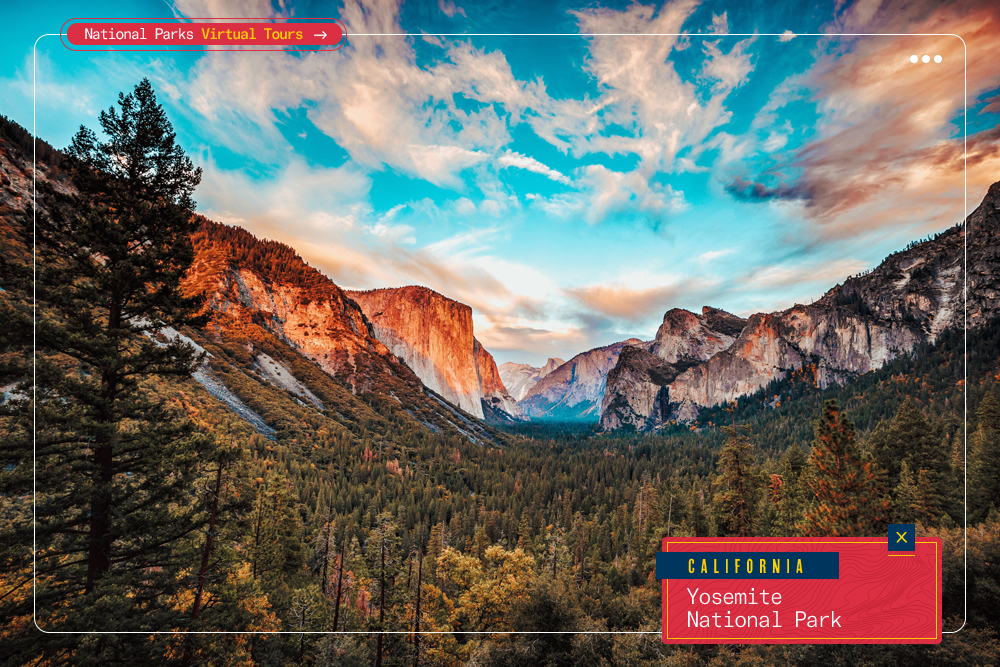 Keep your tent in the closet for another adventure and take a virtual tour of Yosemite National Park in California. 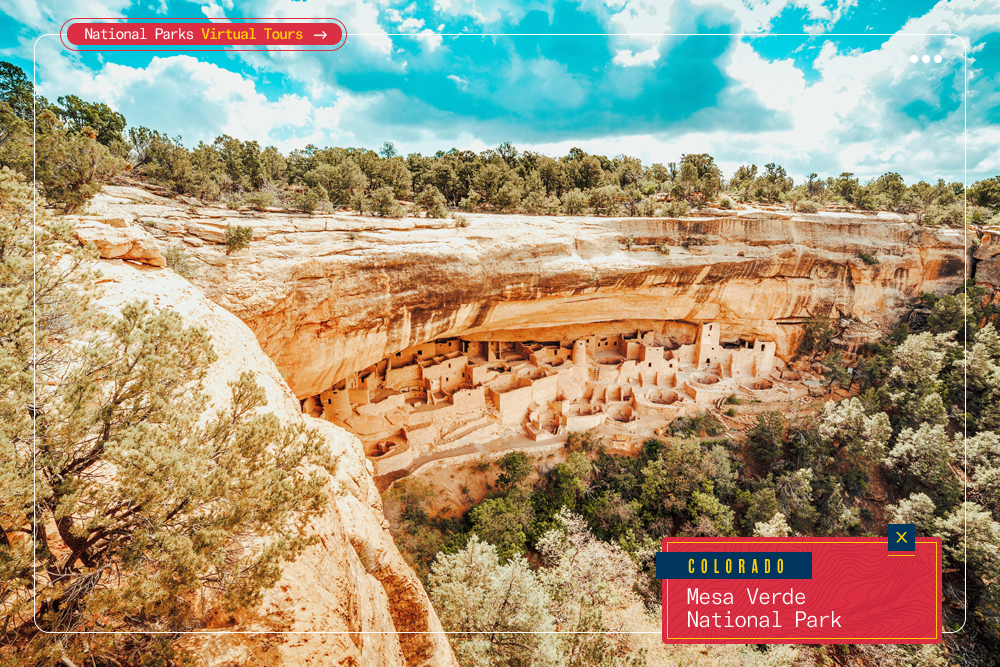 Take a look at Mesa Verde National Park on this virtual tour. 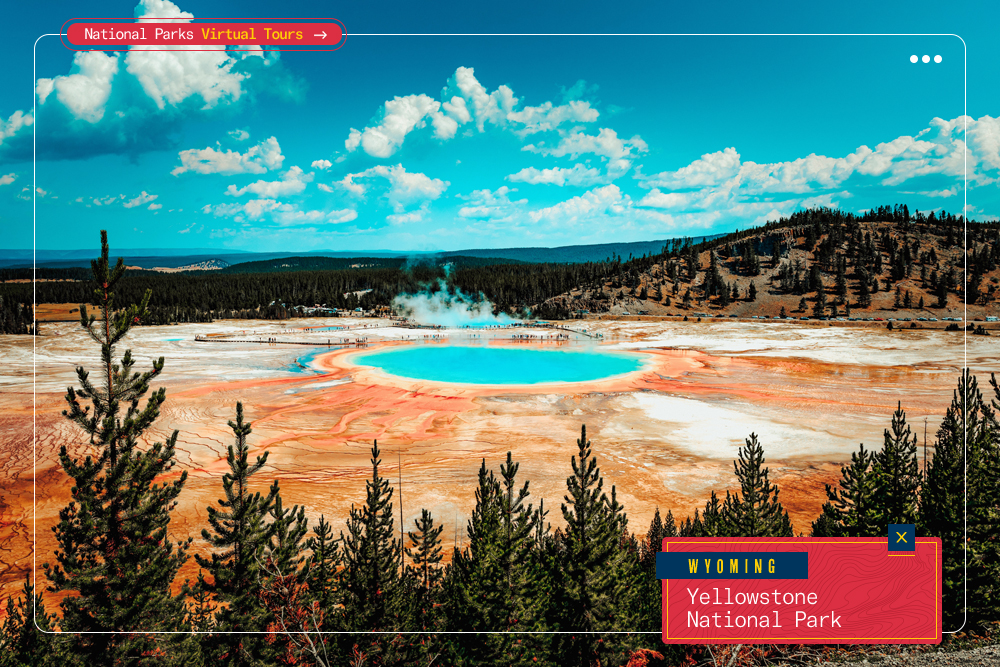 Perched atop a volcanic hot spot, Yellowstone National Park is 3,500 square miles of incredible canyons, green forests, hot springs, and, of course, geysers. This natural park is home to the world-famous geyser, Old Faithful, as well as countless animal species like wolves, antelope, bears, and bison.

You can explore this natural Wyoming haven now via virtual tour or webcams of some of the park’s gushing geysers.

Layers upon layers of geologic discoveries have been unearthed over millions of years by the Colorado River as it eroded away the land at this unbelievable natural wonder. The Grand Canyon is as wide as 18 miles at some points, a mile deep, and hundreds of miles long. The iconic destination is so immense, it’s considered one of the seven natural wonders of the world.

Experience the natural beauty for yourself on a Grand Canyon virtual tour or via video series. 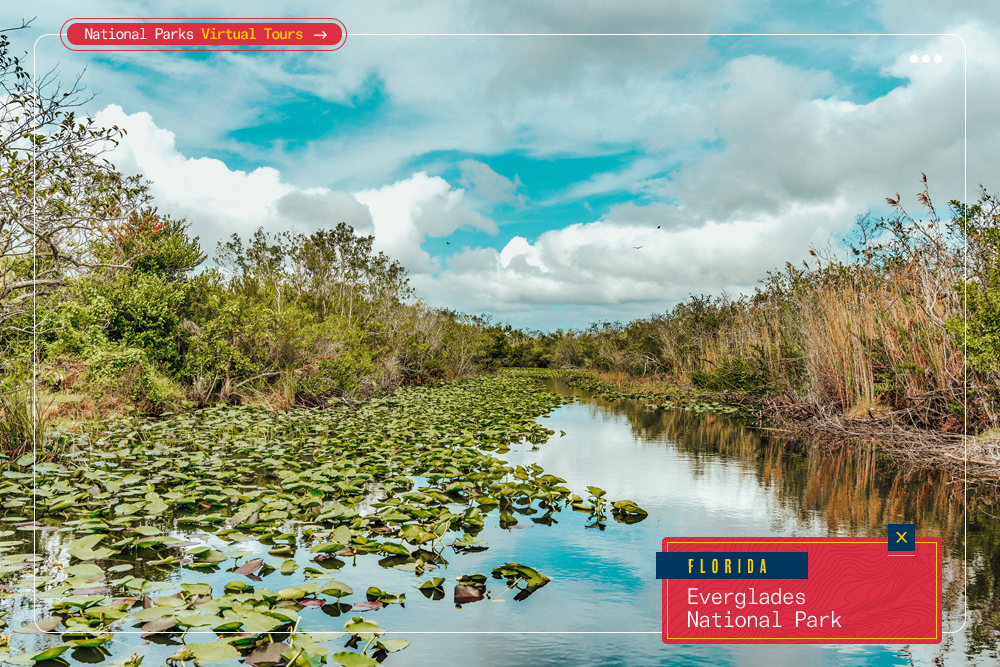 This wetlands preserve occupies 1.5 million acres of the southern tip of Florida and is mainly comprised of mangroves and sawgrass marshes. The park is a protected habitat and is home to many endangered animal species, including the leatherback turtle, Florida panther, West Indian manatee, and American crocodile. The Everglades is also the only place on the planet where crocodiles and alligators coexist. 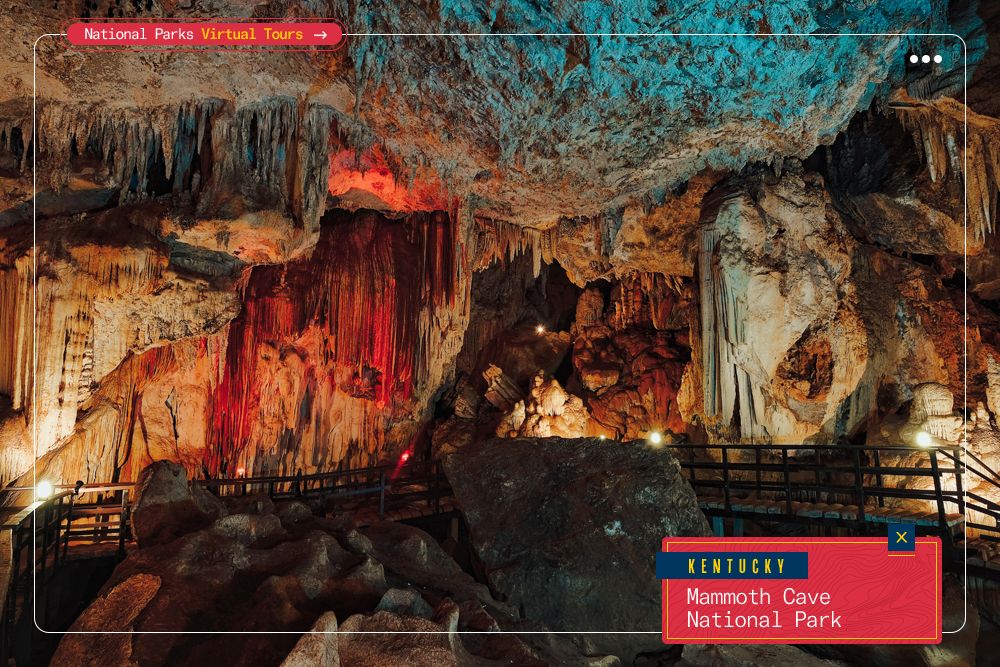 No need to hike right now—you can take a peek at Mammoth Cave National Park on this virtual tour. 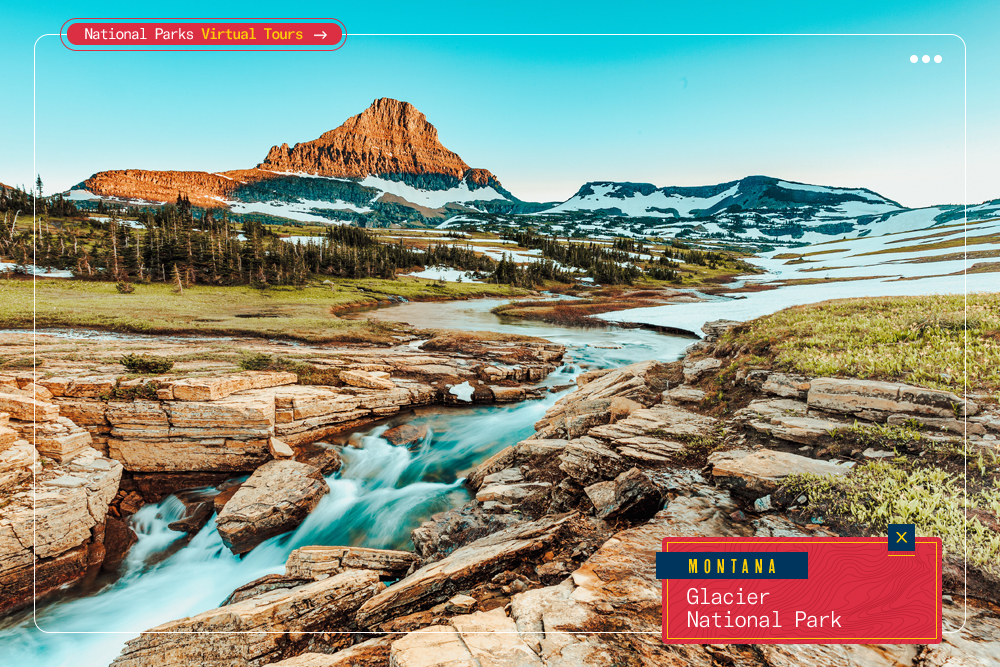 Inhabited by the likes of grizzly bears and mountain goats, you’ll find Glacier National Park a wilderness oasis of glacier-carved terrain and glistening lakes. There are 700 miles of hiking trails throughout the park, winding through the lush forests and vast meadows of the 1,583-square-mile park. 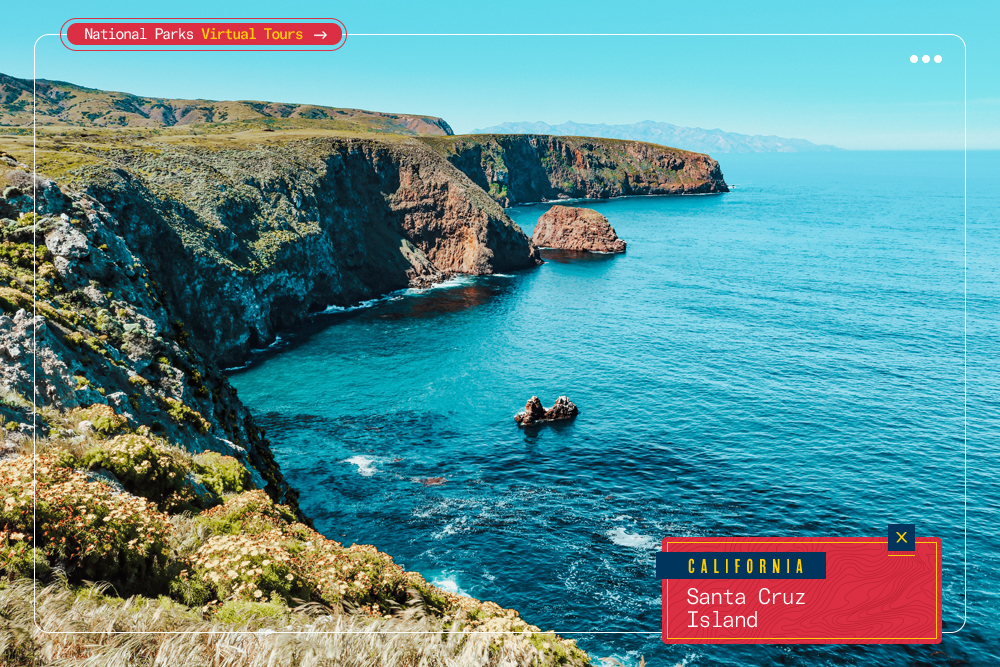 Santa Cruz Island is a preserve of animals and vegetation that aren’t found anywhere else in the world, including the island scrub-jay and eight species of plants. It’s the largest island in California and contains two mountain ranges as well as one of the largest sea caves on Earth, the Painted Cave.

Discover this isolated island paradise from home with this virtual tour, as well as virtual visit content put together by the National Parks Service. 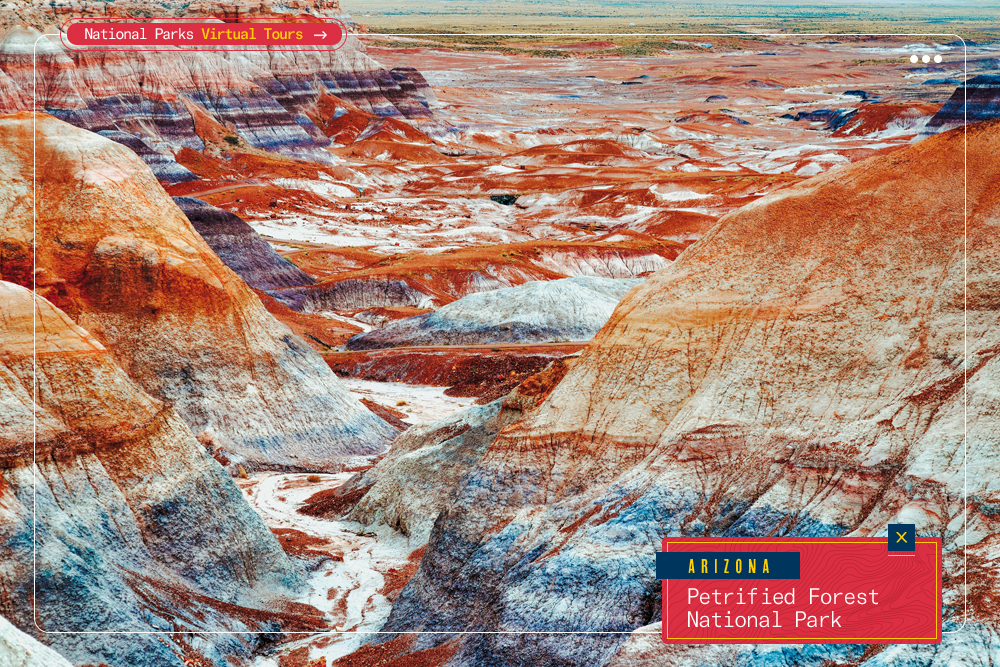 Located in northern Arizona, the Petrified Forest National Park is home to the Rainbow Forest, a colorful collection of fossils of fallen trees from hundreds of millions of years ago. This natural park also contains part of the Painted Desert, a vibrant vista of red and lavender rock.

Check out the scenic hues on this 360-degree virtual tour or find more educational content on the park’s YouTube channel. 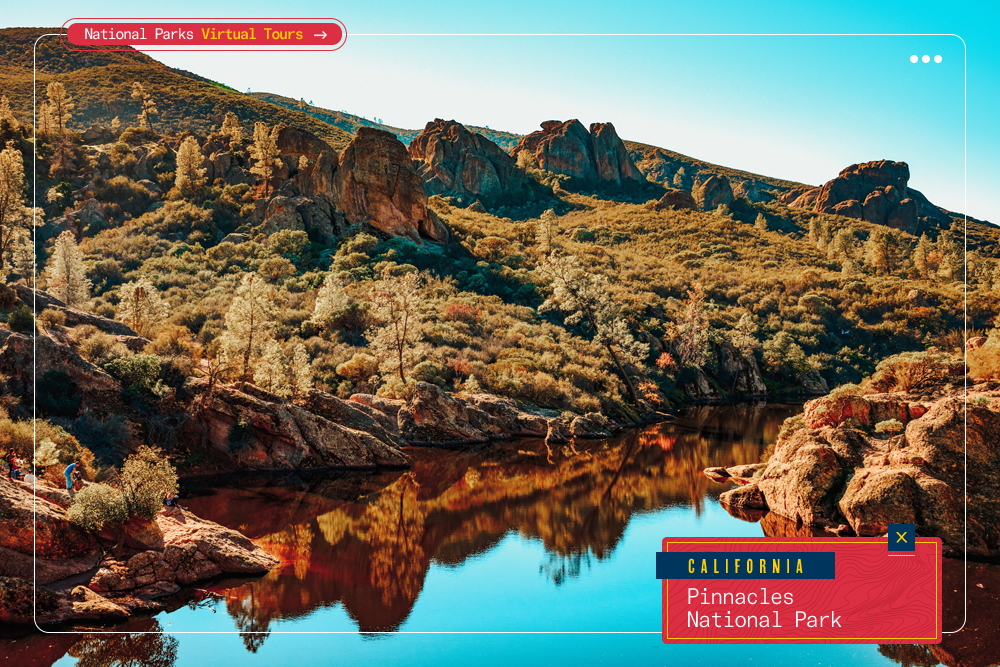 Home to the California Condor, which was brought back from extinction in recent years, Pinnacles National Park is an incredible landscape of towering rock created by multiple volcanic eruptions 23 million years ago.

The natural park is beloved by rock climbers, but you can safely do all the exploring you want with this virtual tour of Pinnacles National Park. 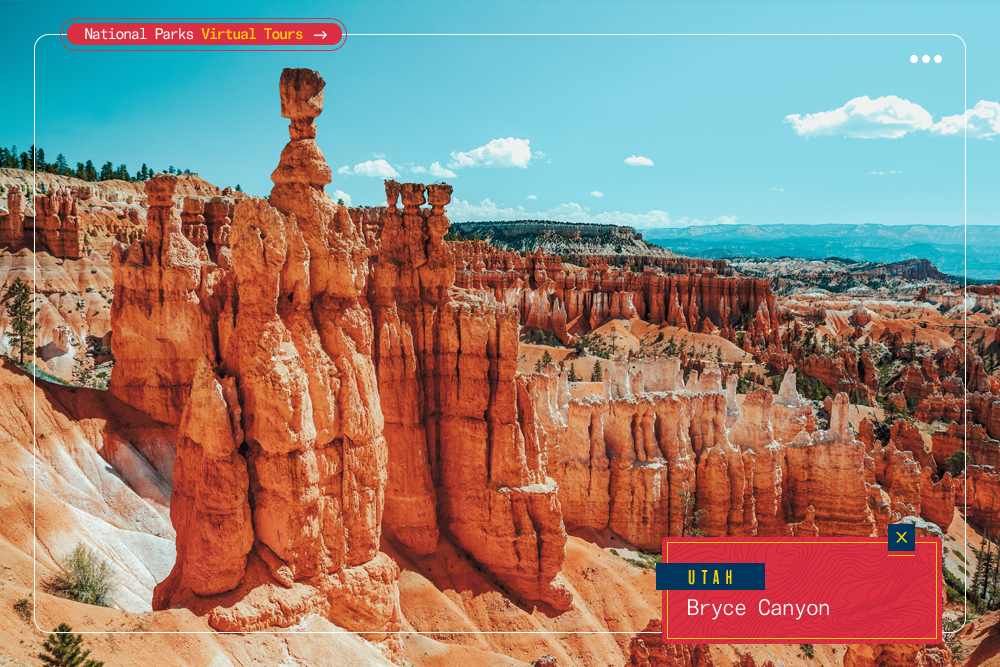 Utah’s Bryce Canyon contains the largest concentration of hoodoos (spire-shaped rock formations) in the world and is known for its otherworldly sunrises and sunsets.

No need to set an alarm for sunrise—see Bryce Canyon in all of its beauty at any time with this guided virtual tour of the national park. 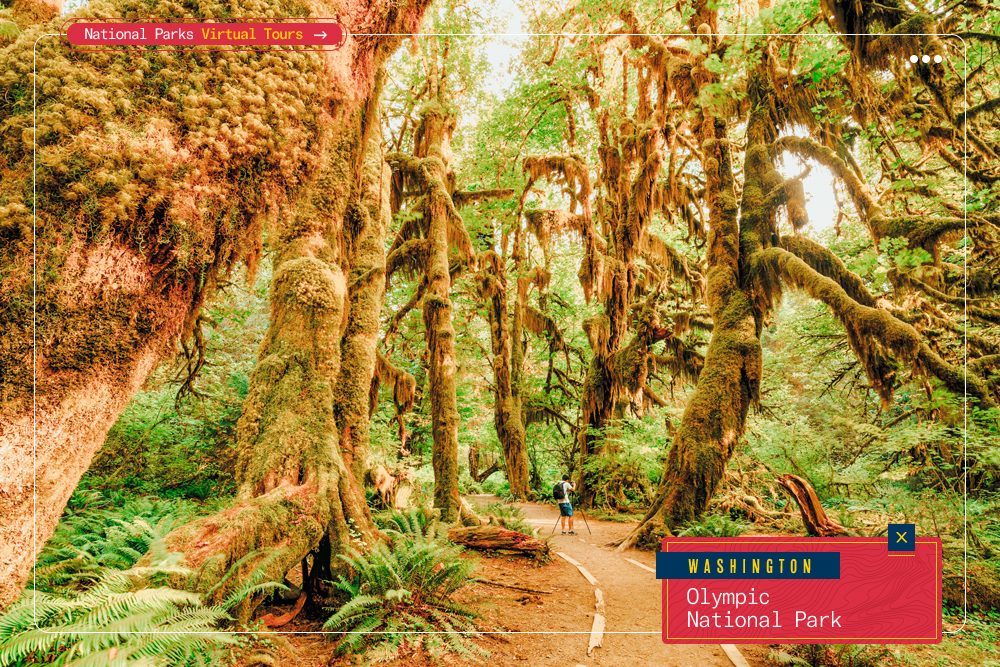 This incredibly vast natural park is comprised of nearly a million acres and includes several ecosystems within its boundaries. You’ll find rainforests, glacier-capped mountains, and rugged coastline all within this Pacific Northwest wonderland. Olympic National Park is home to Mt. Olympus, the tallest peak in the area. 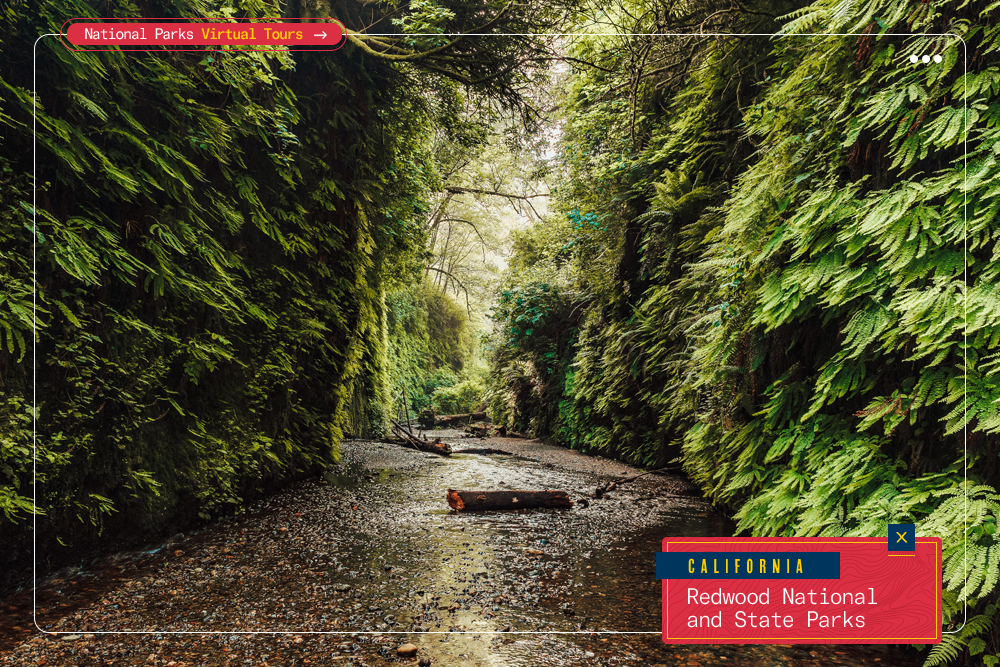 One California’s 13 national parks, and known as having some of the tallest trees in world, Redwood National and State Parks also protect and restore prairies, woodlands, and miles and miles of California coastlines.

Explore the area with a virtual tour, or learn more about the parks with these ranger-hosted videos. 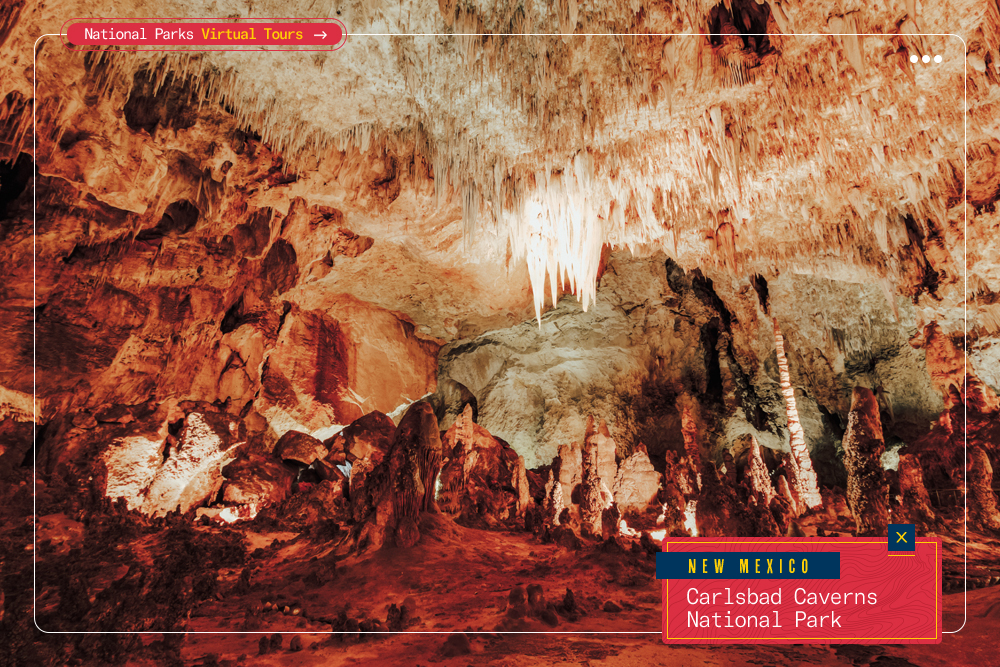 See the incredible underground caverns for yourself on this virtual tour. 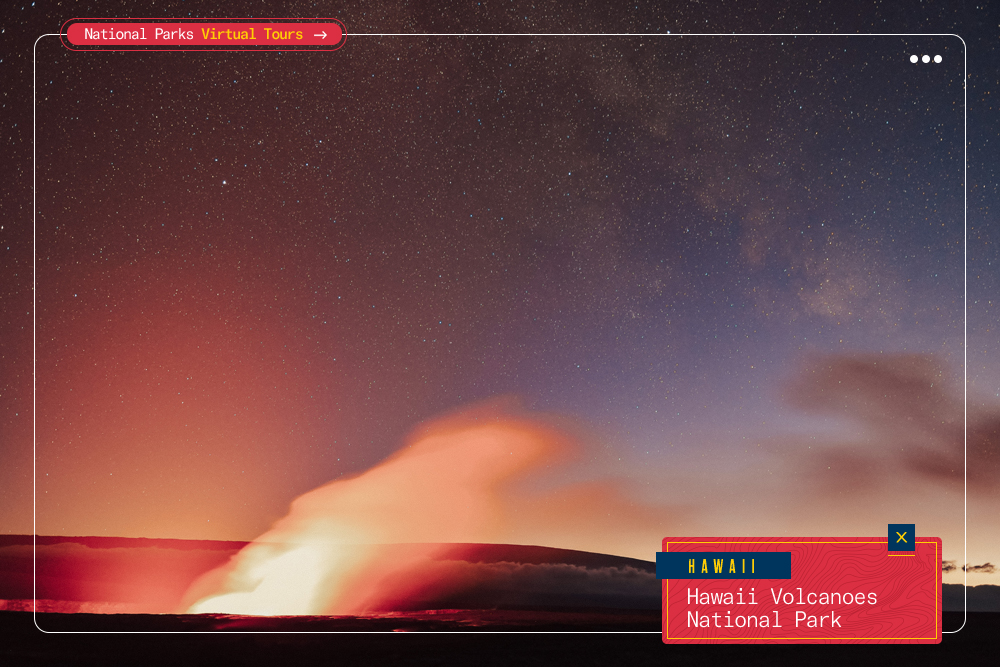 Located on the Big Island of Hawaii, this national park contains two of the most active volcanoes on Earth—Kīlauea and Mauna Loa. Kīlauea was so active, that at one point the volcano produced 250,000 to 650,000 cubic yards of lava every single day.

You can explore the site from home in many ways: via this guided virtual tour, with webcams from Hawaii Volcanoes National Park, or by listening to these informational podcasts about the park.

Arches National Park is comprised of over 2,000 natural arches. Other sandstone formations included in the natural park’s landscape are Balanced Rock and other giant red-rock pinnacles.

Although Arches’ views are best enjoyed at sunset, you can take a 360-degree virtual tour of the park right now. 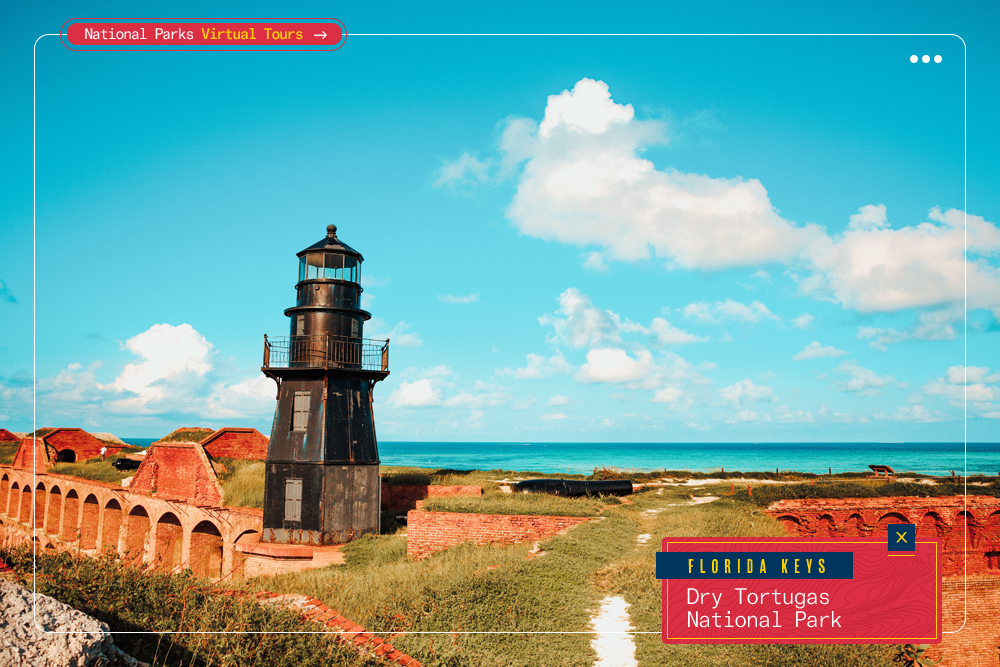 This national park is accessible by boat or seaplane only, so take this guided virtual tour of this picturesque park instead.

Use this list to inspire you when you’re ready for your next journey to the magical and iconic national parks in the U.S. Until then, keep dreaming and exploring America right from home.

To learn when national parks are reopening as it happens, search your desired destination on the National Parks website. Need a way to get to America’s most beautiful national parks when they reopen? Find a rental car here. 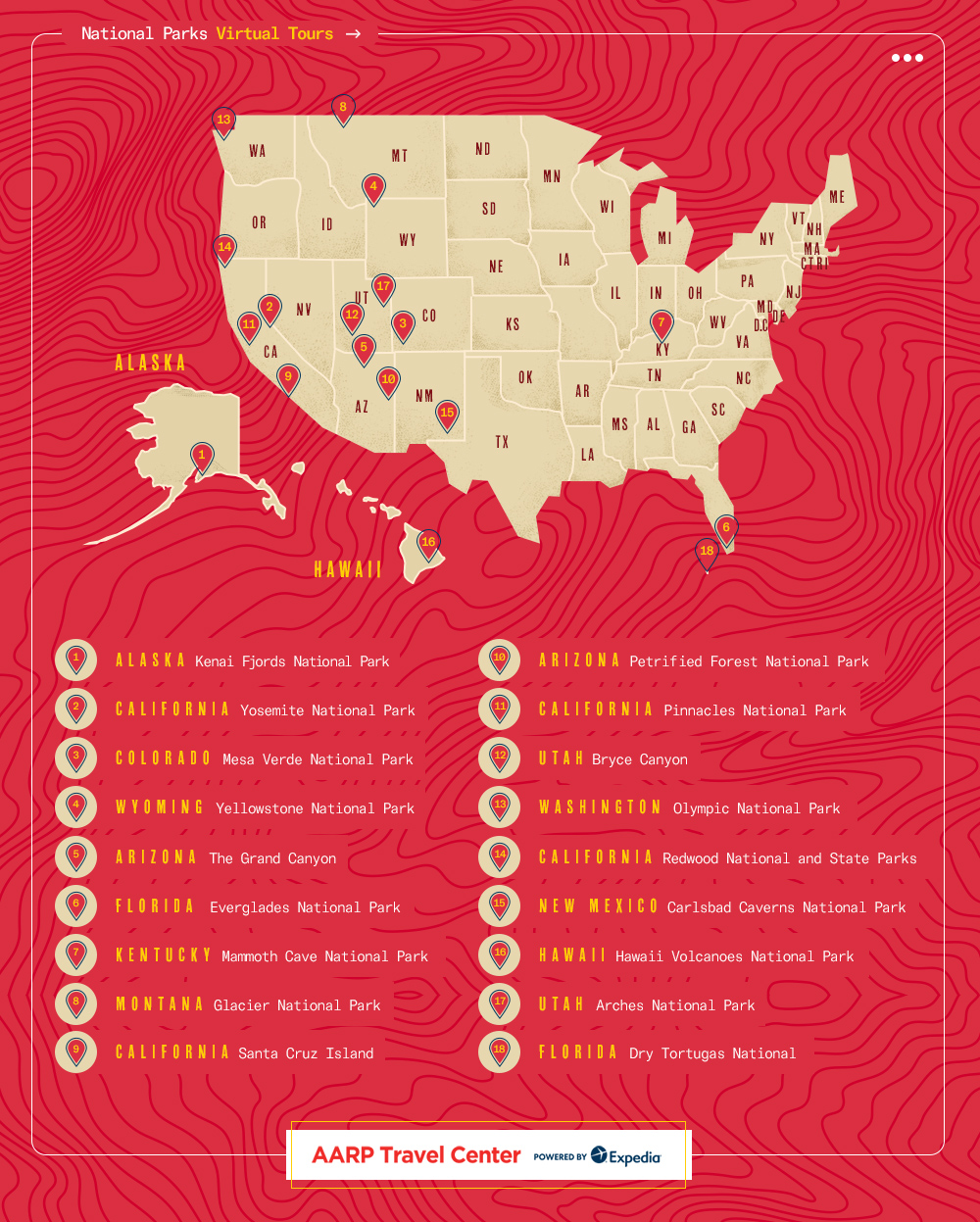 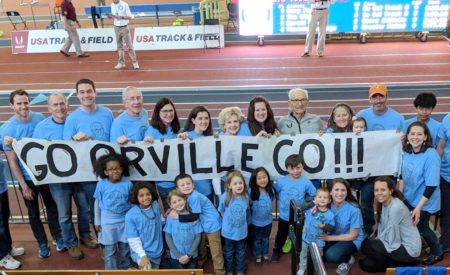 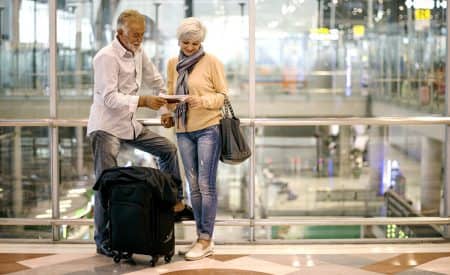